MIZAN : Where it all began…

It all started when Associate Professor Dr Harlina Halizah Siraj (or affectionately known as Dr Har) approached Sister Wardina Safiyyah Fadlullah Wilmot (Wardina) and suggested that she gather some of her closest friends for an Usrah Circle led by Dr Har herself. Indeed Dr Har’s kind act of reaching out to Sister Wardina to guide and support her in becoming a better Muslimah is the first stepping stone for the establishment of this non-profit organization.

“We Are Beautiful, Allah Loves Us” was the  first program launched at Masjid Wilayah in 2011.  The massive turnout further proved that there are many women out there who are craving for knowledge to feed their spiritual soul and also women who seek support and mutual understanding about awrah as part of their effort in striving to become better Muslim women the eyes of the Creator. 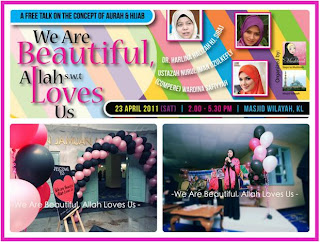 Through the sequence of events from BC, Petak Osem or better known as WABALU had the opportunity to meet with many more Muslim women of high caliber and and great enthusiast in carrying out da’wah work and establishing ukhuwah (friendship) as part of fulfilling their obligations as Allah’s khalifah and vicegerent in this world; spreading love and kindness to all.

A more leisure and informal program (rehlah) was also first organized in October 2011 at Kiara Park, TTDI – a relaxed, get-together program with all the amazing women who have faithfully and commitedly attended BC all these while.

In the end of 2011, Petak Osem has produced a video centering on the topic of “Usrah” that was previewed in front  hundreds of youngsters who attended the annual “Himpunan 1000 Jiwa 1 hati” organized by Raudhatus Sakinah. The video was launched just a few minutes before the stroke of midnight on new year’s eve, to mark the start a new year (2012) that will be filled with Islamic knowledge-spiritual-food-for-the-soul and motivation to pump up the enthusiasm within the youngsters soul. This surprise was definitely a different one from the previous year where the organizer surprised the teenagers with a special appearance by Maher Zain.

To continue the enthusiasm of delivering da’wah and also the message about women empowerment  the shari’ah way, on February 2nd, 2013, an all-new open-to public program was launched called The Hijab Event 2013 (HE2013). The program took place in Asy-Syakirin mosque and attracted an astounding crowd totaling up to 350 participants with non-muslim foreigners also showing interest in attending the event. The heart and soul of the event, aside from  the lineup of talks, is the Hijab Walk. The idea, inspired by Dr Har herself, was meant as an effort to reach out to all sisters and spread the awareness about what is hijab to a muslim woman. Volunteers consisting of adults and children (mashaAllah!) were out and about around KLCC park, handing out free roses attached to a special “love note” and also hijabs as a sign of a gift from the heart to random sisters who have yet to wear the hijab and spread the wisdom behind the beauty of hijab. 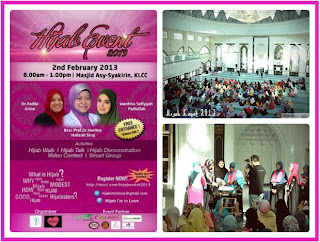 By the end of 2012,  after the success of several small programs and 2 major events, Dr Har proposed that these group of hard-working women establish their group as a registered, non-government organization. Several dedicated sisters who have shown tireless support towards WABALU were invited to become part of the workforce of the team in assisting the work involved in setting up an NGO. Nurul Erna Dewi Mohd Said (Erna), Nadzrimah Mokhtar (Nadz), Nur Izzaidah Binti Abdull Zubi (Aida) and Nurul Haqiqah Dol Hamid (Iqa) joined the team of Petak Osem with hopes of together building an NGO for the benefit of all Muslim women out there.  Alhamdulillah on 23rd April 2013, MIZAN, which stands for Muslimah Interest Zone And Networking, an idea that was specially thought of by Dr Har, became a registered NGO.

It is within our hope that MIZAN will continuously be steadfast in delivering the teachings of Qur’an and Sunnah. May God set our hearts straight onto His path and may MIZAN’s work of spreading love and knowledge amongst mankind be the testament Islam is the ideal way of life.

“Agree To Disagree” – That is what we hold on to; to have mutual respect for others when it comes to differing of opinions.

“Spread More Love, Do More Good” – That is our goal.

O’ Allah, connect these hearts and turn them toward Your Love and Mercy.  Ameen.

This site uses Akismet to reduce spam. Learn how your comment data is processed.